India – Contrary to popular belief, India is actually the 5th most sexually active country in the world (according to Insider Monkey). While the whole world is progressively becoming more open-minded sexuality wise, how is the Indian population keeping up?

The main online Indian sex shop adultproductsindia.com has released statistical data related to online searches for sex toys that may surprise you. The data shows us how the behaviour of Indian users has evolved between the first semester of 2018 and 2019.

The Sex Toys India is Searching For

Overall, there was an increase in the search for the different categories of sex toys. Masturbators are holding the top position as strongly as ever. However, this is a category that includes a broad range of toys: from fleshlights to sex dolls and vibrators. It is interesting to observe that the total number of searches increased, but the most interesting data is below.

The search for sex dolls more than doubled, resulting in an increase of 245.71% in the number of searches.

The number of women searching for sex toys has been increasing rapidly over the years. This year is no exception: the female users of the website grew half the number of 2018. 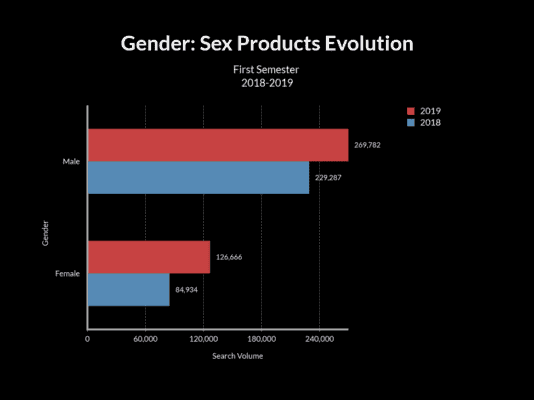 Overall, the number of users searching for sex products in India has increased in both genders, but had a bigger proportion among the female audience with 49.13% growth in searches, while searches by male users had a growth of 17.66% regarding last year.

In fact, every age segment seems to have grown in numbers – except for the younger one, from 18 to 24-years-old,  which suffered a decrease of 24.22% compared to last year.

Search Devices Comparison
People in India are abandoning desktops and tablets to search mostly on their mobile devices:  the search for sex toys is no exception.

Since the first semester of 2018, mobile searches on the adult Indian website have grown 40.04%, while desktop searches dropped 10.89% and tablet searches decreased by 9.59%. Users are increasingly looking for more practical ways to purchase the products they need.

A Positive Evolution for the Indian Population

Studies have shown that sex toy sales are indicative of more than just a healthy appetite in the bedroom.

Scientists have found connections between sexual positivity and satisfaction and the improvement of mental, physical, and social health. Furthermore, one paper suggests that sex toys have the potential to greatly contribute to the overall improvement of peoples sexual health en masse. Individuals who reported frequent use of sex toys showed a greater connection with partners, as well as reported lower levels of stress.

In fact, the use of personal masturbators, in the absence of a committed partner, may help satisfy urges and promote healthier sex practices amongst single individuals.

Sex toys in India are also making an emergence in the senior community, which according to one source, is about more than just having a good time. Sex toys, when used properly, can actually improve senior health. How? By easing some of the inevitable problems of ageing, such as dryness and muscular atrophy. They may also help protect against serious illnesses, like prostate cancer, or reduce the pain that arthritis can cause.

Try out these festive delights on the occasion of Makar Sankranti

82 / 100 Powered by Rank Math SEO In the Hindu calendar, the Makar Sankranti festival is dedicated to the Sun deity Surya, while ‘Magh […]

83 / 100 Powered by Rank Math SEO Like any other Indian festival, harvest festival lohri is incomplete without some appetizing, traditional foods. The harvest […]